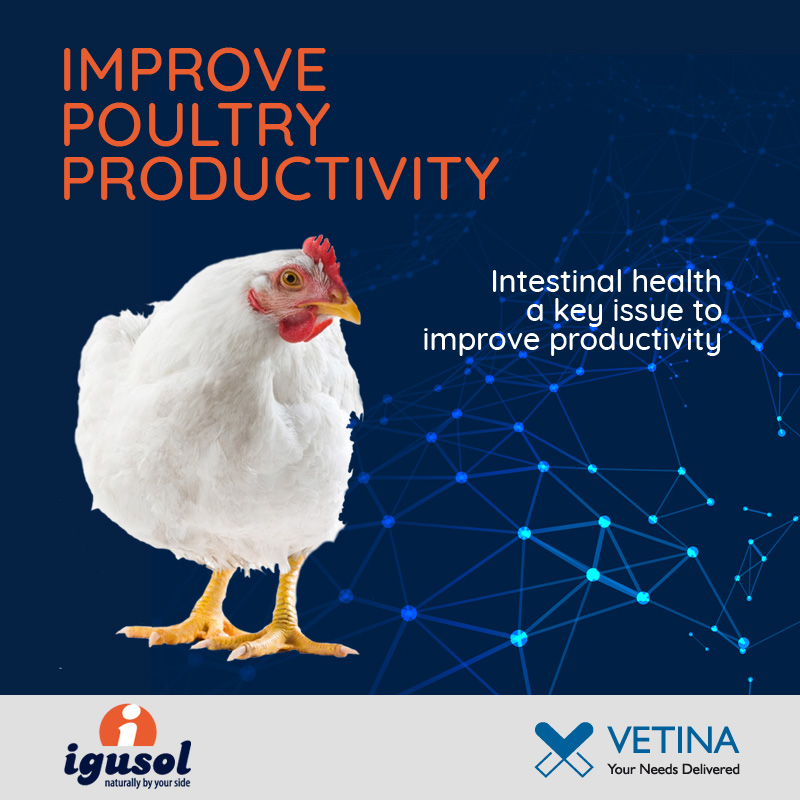 Gut health covers multiple positive aspects of the gastrointestinal (GI) tract, such as; effective digestion by absorption of nutrient, metabolism and energy generation, normal and stable intestinal community of many different species of microorganisms and absence of GI illness.

The gut is the primary site for multitude of processes such as, digestion, fermentation, nutrient absorption, nutrient metabolism, intestinal integrity, immune recognition, immune regulation and development of immune tolerance. The gastrointestinal tract is mainly composed of physical, chemical, immunological and microbiological components and acts as a selective barrier between the tissues of the bird and its luminal environment. Besides, the gut is the most extensive exposed surface and is constantly exposed to wide variety of potentially beneficial non-infectious as well as harmful infectious agents (Sethiya, 2016).

An optimal gut health is of vital importance to the performance of production animals and is synonymous in animal production industries with animal health. It has been reported that exposure of gut to such harmful infectious agents or pathogens, cause an imbalance which can lead to severe productivity loss, sudden dietary changes, intestinal disease (worm infestation, coccidiosis) and immune suppression (McDevitt et al., 2006).

Microbiota is a diverse and complex microbial community of bacteria, fungi, Archea, protozoa and viruses but mainly are dominated by bacteria which are in the gastrointestinal compartments of chickens. Currently, is very common use the term Microbiome, this concept is wider that microbiota because the microbiome is a combination of the microorganisms, their genes and their metabolites in an ecological niche.

The GI tract serves as the home for anywhere between 500–1000 bacterial species, comprising up to 100 trillion cells in total (Maki et al., 2018), but the abundance and diversity of the microbiota changes along the GI tract. There are regions with less tolerable conditions and faster passage that present lower numbers of bacteria.

Furthermore, although poultry microbiotas are similar, differences exist between bird species and breeds. For example, layer chickens harbor a more complex fecal microbiota compared to broiler chickens, although this association is likely related to the longevity of layers. For the most part, broilers and layers are fairly similar in regard to their successional patterns and mature community compositions (Maki et al., 2018).

Microbiota has a main role on maintenance of gastrointestinal health, for this, the functions of the microbiota have been analyzed. There are multiple interactions between the host cells, the intestinal environment, bacterial cells and feed components. These interactions emphasize the extremely important role of gut microbiota in the health and well-being of the host.

These microbes receive their nutrients from the host and, in turn, contribute essential nutrients to the host, promote intestinal development, enhance gut integrity, provide competitive exclusion of pathogens, modulate the regulation and function of the host immune system, and sustain immune homeostasis by controlling physiological inflammation (Kogut et al., 2017).

The bacterial form a protective barrier that covers the gut, attaching to the epithelial walls of the enterocyte preventing the growth of pathogenic bacteria, such as Salmonella, Campylobacter and Clostridium perfringens. This is most commonly known as competitive exclusion. So, the commensal microbiota dominate attachment sites on the gut cells reducing the opportunity for attachment and colonization by pathogens.

Microbiota induce a non-pathogenic immune response, which provides both nutrition and protection for the animal and could be considered important in the stimulation, development and maturation of the immune system. In fact, commensal microbiota can stimulate the mucus layer, epithelial monolayer, the intestinal immune cells (e.g., cytotoxic and helper T cells, immunoglobulin producing cells and phagocytic cells), and the lamina propria. These tissues build barriers between the host and the microbes and combat undesirable gut microorganisms (Kogut et al., 2017).

Influence of microbiota on growth performance and well-being

Improving growth performance in chickens has been one of the most important goals in poultry research for a long time. Due to the role of the microbiome, currently, the livestock industry is seeking to promote a beneficial gut microbiota. So, there are opportunities to influence in gut health, typically focus on modulation of the intestinal microbiome and/or mucosal immune function. And although, there are still various unknowns in this area, there are promising studies about the wonderful influence of a balanced microbiome.

Although the relationship between diversity of species and feeding efficiency of poultry is not clear, several studies found that bacterial diversity within intestinal tract is higher in birds with high feed efficiency. Furthermore, the results of microbiota studies are influenced by intrinsic characteristics of birds such as genetics, gender, age, breed, health status, as well as by farm conditions including type of diet, feed additives, environment, and farm management, among others. Provided that microbiota does influence chicken productivity, these factors influencing microbiota composition may in turn influence performance.

There are a number of natural products that are mainly utilized for providing beneficial role for improving health of poultry against various infectious diseases .These natural products and some minerals can help maintain healthy microbial communities in all regions of the gut even under circumstances that normally threaten intestinal health like feed withdrawal, intestinal infections with coccidian and heat stress (Oviedo-Rondón et al., 2019; Sethiya et al., 2016).

Phytobiotics, like essential oils, are an example of natural additives obtained from medicinal and aromatic plant materials. Blends of essential oils are mixtures of phytochemical compounds, such as carvacrol, thymol, and cinnamaldehyde among others, that have selective antimicrobial properties (Lee et al., 2002) and increase the release of digestive enzymes and reduce the amount of nutrients available for the growth of bacteria in the lumen of gut (Pasteiner, 2006). One of the mechanisms of action that explain the antimicrobial properties of essential oils are their capacity of changing the lipid solubility at the surface by hydrophobic constituents, which may rupture or disintegrate the outer membrane of bacteria (Dorman and Deans, 2000).

The use of some specific essentials oils blends has been shown to have efficacy towards reducing the colonization and proliferation of Clostridium perfringens and controlling coccidia infection and, consequently, may help to reduce necrotic enteritis (Oviedo-rondón et al., 2019). Another study with essential oils, mainly thymol, showed the interaction of the essential oils with the cell membrane by hydrogen bonding, rendering the membranes and mitochondria more permeable and disintegrating the outer cell membrane. Besides, the essentials oils could inhibit the growth of E. coli O157:H7, S. aureus, S. enterica, P. fluorescens and B. thermosphacta (Sethiya et al., 2016; Di Pasqua et al.; 2010).

In conclusion, gut health involves the maintenance of a delicate balance between the host, the intestinal microbiota, the intestinal environment and dietary compounds. The maintaining of a balance in gut microbiota is a key aspect of getting the best growth, better efficiency or any animal performance parameter. The involvement of natural phytochemicals compounds on improving of intestinal morphology and nutrient absorption encourage to include these compounds in the diet like additives to improve gut health, promote the growth and overall performance of birds.