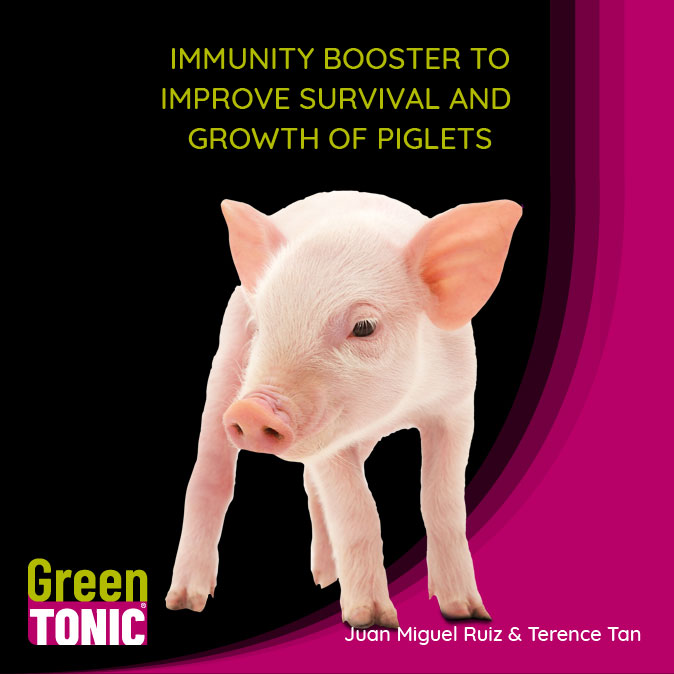 IMMUNITY BOOSTER TO IMPROVE SURVIVAL AND GROWTH OF PIGLETS

Nowadays pig production has changed substantially compared to years ago. One of the main trends, it is the use of hyper prolific sows, that are producing a much higher number of piglets. Those piglets have also a better growing potential.

Piglets weight at birth, although it is reduced in hyper prolific litters, it is still in a fairly good situation. And these sows have a very good milk yield capacity, enough to satisfy the high growing capacity of the piglets.

However, there are a few limitations to cope successfully with this type of animals:

From the point of view of swine nutrition, the first limitation regarding colostrum yield, it is of utmost importance. Particularly for the smaller piglets.

Colostrum is rich in several components. Here, we would like to highlight it as a source of energy and immunoglobulins. Colostrum contributes to the development of the gastrointestinal system of the piglets too. It is recommended that each new-born piglet intakes at least 200-250 ml of colostrum. By that, we reach the best survival and growth rates.

Igusol has developed a product in order to enhance the vigour and growth, and ensure survival of the piglets, particularly of the smallest.

The product is called GreenTonic, and it is intended to be used through creep-feeding. The consumption will depend on piglet’s competition between them, and on the sows’ milk yield. Nevertheless, this will always be a benefit to small piglets who, as already mentioned, they have more difficulties to success acceding to the nipple and, consequently, to the milk or colostrum.

The composition of the product covers a wide range of functions:

Field Validation of the product

Recently, another trial was added to the wide repertoire of GreenTonic. The last trial has been carried out in Simpang-Lima, Perak (Malaysia) between October 2020 and December 2020 in a 160 sows farm.

The aim of the trial was set as an evaluation of piglets’ performance and survival when GreenTonic is provided from day 2 to day 8 of life. And from 2 days before weaning to 3 days after weaning.

The farm has a farrowing rate of 6 sows/week. A total of 60 sows were sampled, that means the trial took place during 10 weeks. Sows were allocated to control or GreenTonic treatment depending on their position into the farrowing sequence.

The following parameters were measured: birth weight of the piglets (actually measured on day 2 of life), weaning weight, use of antibiotics per litter, mortality, and diarrhoea incidence.

Control group showed two thirds of the mortality during the first 3 weeks. Such mortality was tagged as “diarrhoea” and “weak piglet”. The last week before weaning occurred the last third of mortality due to “weak piglets” and a case of “crushing”.

GreenTonic group had all the deceased piglets during the first 3 weeks of lactation. And all of them were tagged as “weak piglets”.

Whereas no differences were found on initial body weight at birth, GreenTonic piglets reached weaning with an average of 400 grams more of weight. This weight returns a better average daily gain along the study.

The consumption of GreenTonic by the piglets followed the normal pattern that it is observed in other trials too. This is shown in table 3.

As well, after weaning, farmer reported no delayed time to start consuming pre-starter in GreenTonic group, whereas the control group showed a 2 days delay on that consumption.

Lastly, medicaments used is massively reported for control group (92% of the cases). Both amoxicillin and a spayed solution against wounds.

GreenTonic has shown to be effective on the protection of the newborn piglets through an indirect control of diarrhoeas, less mortality and better growth.

As well, it seems to be an effect related to avoiding stress on the animals, as GreenTonic group has not shown mortality due to crushing and rarely use of the sprayed solution against wounds.

Also, it can be determined that GreenTonic has sped up the consumption of solid feed by the piglets. Both at the creep-feed in day 10 and after weaning.

You can allow, block or delete the cookies installed on your device by clicking on the following button. If you do not allow certain cookies to be installed on your browser, you may not be able to access certain services and your experience on our website may be less satisfactory.

These cookies allow us to quantify the number of users and also perform measurements and statistical analyses on our users’ use of our website. The aim of this analysis is to improve the browsing experience on our website.

These cookies store information about your behaviour online, obtained through continued observation. Thanks to these, we know what your internet browsing habits are and can show you adverts related to your browsing profile.

By clicking “Save configuration”, the selection of cookies you have made will be saved. If you have not selected any option, pressing this button will be equivalent to rejecting all cookies.

Igusol uses its own and third-party cookies on this website. Some are strictly necessary for the operation of the page, and other optional are used to: a) Analytical purposes, b) enable personalization of the website c) show you personalized advertising.

Click Here for more information. You can accept all cookies by pressing the button “Accept” or configure them or reject their use by pressing “Configure”